Objectives: Osteopetrosis, also known as Albers-Schönberg disease or marble bone disease, is an unusual inherited bone disorder. The bones become condensed, sclerotic and thick, but their abnormal structure paradoxically weakens them and expose them to fractures and infections. This disease is clinically and genetically heterogeneous. It has three forms: autosomal recessive, autosomal dominant and X related inheritance.
In this paper, through three clinical cases, we studied the clinico-radiological aspects of craniofacial involvement in osteopetrosis.
Methods: We present three clinical cases of osteopetrosis. The first patient had an autosomal recessive form of osteopetrosis or malignant form and the two others had an autosomal dominant form or adult form. We performed on the three patients facial and cerebral CT scan before surgical treatment. We are going to show the clinical and the radiological aspects of the craniofacial involvement.
Results: The first patient was a two-year-old girl with a malignant form. She had growth retardation, delayed tooth eruption hepatosplenomegaly and an acquired blindness. The biological analysis showed pancytopenia. The girl suffered from infection in the parotid gland which treated surgically. Few days later she developed a spondylodiscitis and she was passed away due to septic shock.
The two other patients had an adult form with different manifestations severity. The complications began at the age of thirty for both of them, with long bones fractures and osteitis of the jaws. One of them had optical nerve compression with bilateral blindness and exophthalmos.
Conclusions: The positive diagnosis of osteopetrosis is based on the clinical and the radiological findings and there is no need for genetic tests. The autosomal recessive form also called malignant form is lethal due to pancytopenia. the hematopoietic stem cell transplantation could be used in some malignant cases.
The osteopetrosis manifestations in adult form vary greatly in severity and presentation. However, this form has no impact on life expectancy. 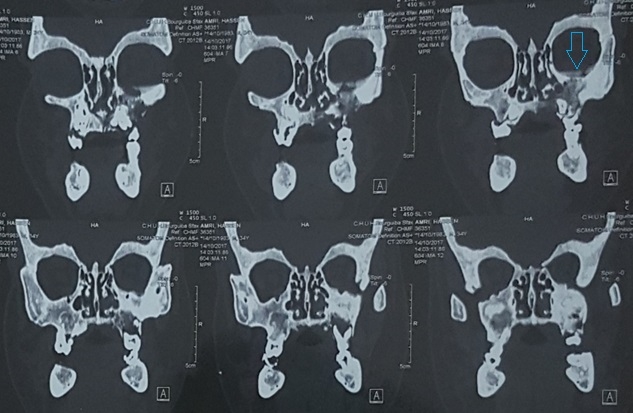