Objectives: Polycrystalline-tetragonal-zirconia with 3mol% yttria added as a stabilizer (3Y-TZP) is commonly used for high-strength applications in restorative dentistry. However, it can experience microstructural change, namely tetragonal-to-monoclinic transformation, when exposed to humid environments and elevated temperatures, known as low-temperature-degradation. The desirable, high-strength tetragonal-phase is thermodynamically metastable at the room-temperature, and can gradually transform to monoclinic-phase during long-term service in the mouth. The objective of this study was to determine the kinetics of tetragonal-to-monoclinic transformation in 3Y-TZP powder via hydrothermal treatment.
Methods: 3Y-Zirconia powder (Zpex, Tosoh USA, Inc) was initially annealed at 1580°C, facilitating transformation to the tetragonal-phase. Four grams of Zpex zirconia powder were incubated in an autoclave at 134°C in humidity for 1h, 3h, 5h, 9h, 12h, 16h, and 24h, with an ~3 °C/min ramping rate. The specimens were subsequently cooled in the furnace. Following autoclaving, the aged powder was dried under vacuum. Raman-spectroscopy was performed to determine the proportion of monoclinic-phase formation using a 532nm laser. A total number of 400 Raman-spectra were averaged for each specimen. The fraction of the monoclinic-phase was calculated according to the intensities of the characteristic tetragonal and monoclinic peaks.
Results: The volume percentages of newly formed monoclinic-phase increased over aging time with a fixed moisture amount (Fig.1). The first and third hours of aging promoted minimal monoclinic-phase transformation of 3.5% and 6.0%, respectively. The rate of phase transformation was greatest between the aging times of 5h and 9h, as monoclinic-phase content increased from 15.4% to 53.9%, respectively. The degradation rate was reduced after 16h aging, as the tetragonal-phase neared depletion. After 24h aging, the zirconia specimen is largely composed of monoclinic-phase (91.7%), indicating that transformation is near complete.
Conclusions: Tetragonal-to-monoclinic degradation of 3Y-TZP powder is evident under the hydrothermal aging conditions of this study. The degradation kinetics exhibited nonlinear-behavior. Additional aging variables are currently being investigated. 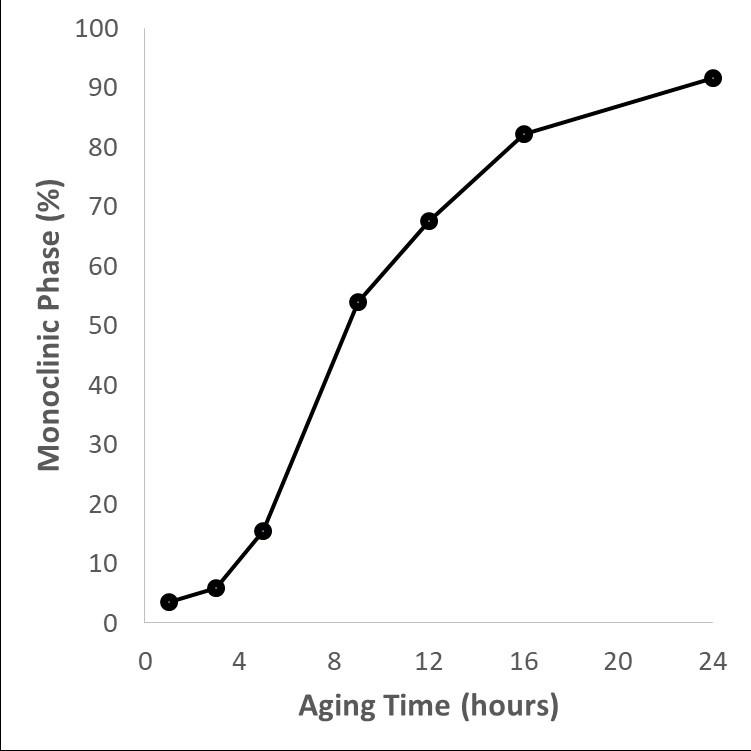