Objectives: Diabetes increases the risk and severity of periodontal disease. An aspect that has received relatively little attention is the impact of diabetes on epithelial barrier function which limits access of bacteria to underlying periodontal tissues to limit inflammation and periodontal disease. We engineered a 3D platform to deconvolute the dynamic contribution of epithelium to a diabetic environment characterized by exposure of gingival epithelial cells to high glucose.
Methods: To study the role of epithelial cells in regulating epithelium barrier function under stress, we used a microfluidic device in which epithelial cells lined in a perfusable channel. This in-vitro disease epithelial model is a 3D printed microfluidic platform that is comprised of 3D cylindrical channel (diameter 160 µm) embedded within hydrogel solution of collagen I (Fig.1). The epi-oral tube was exposed to 11 nmol/ml glucose to mimic diabetic conditions compared to control. To expand our studies, we recapitulated the inflammation under diabetic conditions by treating diabetic epithelial tubes with LPS (100 ng/ml) for 1 hr. To evaluate oral epithelial behavior under these conditions, we measure the epithelial integrity by measuring the extravasation of fluorescently-labeled 70 kDa dextran from the tube.
Results: The LPS treated diabetic tubes were exhibited 15-fold increase comparing to the untreated (CTRL) epithelial tubes indicating the epithelium damage. To further identify the mechanism regulating epithelial integrity, we tested the role of FOXO1- β-catenin interactions into junctional epithelium. Specifically, β-catenin overexpression was sufficient to retain epithelial integrity under diabetic inflammatory conditions. Finally, we identified that the majority of β-catenin is located at the cytoplasmic side of the membrane as a component of cadherin-based cell-cell connections and maintaining epithelial integrity through FOXO1 translocation.
Conclusions: Collectively, this study permits us to capture dynamic changes on epithelial barrier under inflammatory conditions
by deconvoluting FOXO1-β-catenin mechanism and potentially, utilize them as potential therapeutic targets against periodontal diseases. 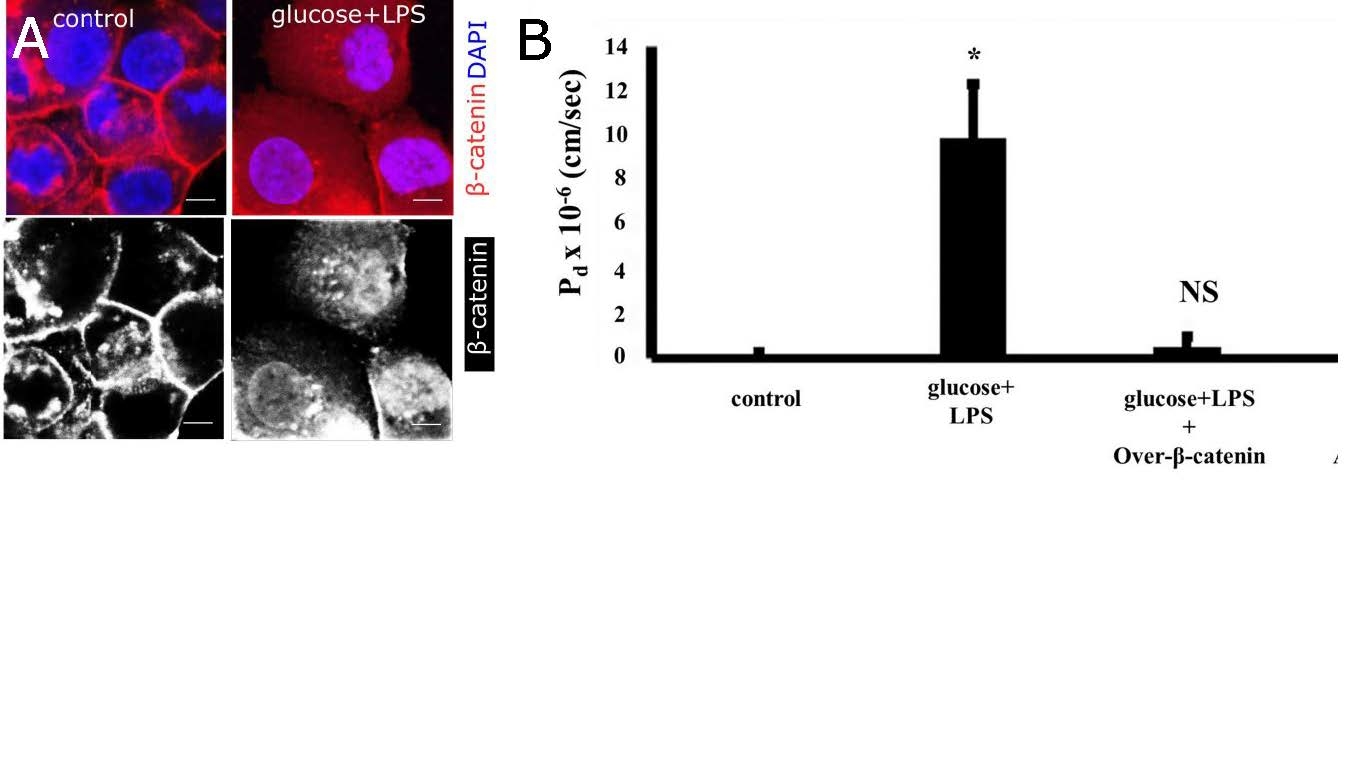